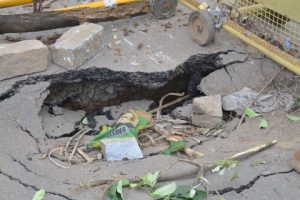 On Tuesday,the damaged VVIP road over the Harmu river bridge near Harmu Ghat hit the traffic in Ranchi.

Right under the bridge lies the Harmu River.It is here where the state government is implementing the crore worth project to beautify this river which looks like a drain in letter and spirit.

Though the Traffic police had encircled the damaged road,the traffic remained affected for the whole day.

The road over the bridge had cracked due to the rains during the past two days.Even on Tuesday,Ranchi witnessed rains.