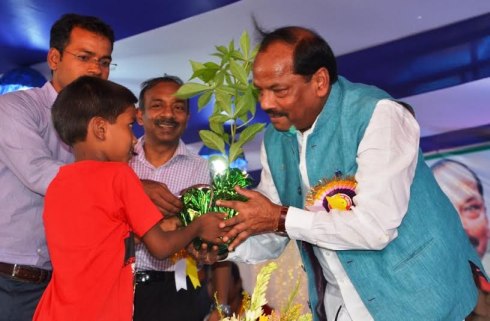 On the first day of a week long Van Mahotsav,Chief Minister Raghubar Das on Friday launched a tree plantation drive across Jharkhand.

The CM himself participated in the drive at Jaynagar,lying between Patratu Thermal Power Plant and Jindal Steel Factory in Patratu in Ramgarh district where 75,000 saplings were planted by senior citizens,officials and students.Das apeared to be playing a role of their leader.

Talking to media persons,the CM said that he was concerned over the decreasing green cover in the state and has planned to embark on a green drive.”The plantation campaign will involve people across the state”said Principal Secretary,Forest, Sukhdeo Singh.

In fact Van Mahotsav or the Forest day was started in 1950 by K.M.Munshi,the then Union Minister for Agriculture and Food.The aim was to create enthusiasm among the masses for forest conservation and planting trees.

Though Van Mahotsav is a week- long festival,celebrated on different days in different parts of India,the plantation drive launched by the CM Raghubar Das is slated to continue for a month.It is sslated to end on July 31,2016.

At Jaynagar,the plantation drive kick started by the CM was participated by 96-year old woman called Sarswati Devi who too planted a tree there.