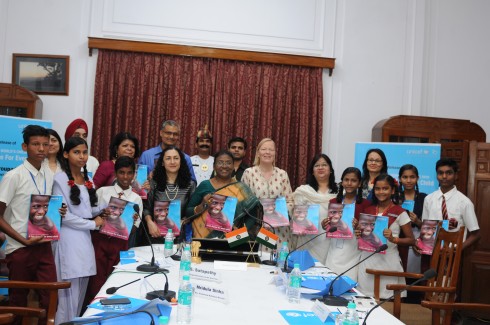 The report paints a stark picture of what is in store for the world’s poorest children if governments, donors, businesses and international organizations do not accelerate efforts to address their needs. Denying children a fair chance in life not only impacts their future but also fuels the intergenerational cycles of disadvantage jeopardising the future of their societies,states the report.

The Governor said, “When children start life on an unequal playing field, significant differences emerge between those who have the most and those who have the least. These inequalities affect their right to survival, health, education and nutrition.”

She added, “One of the most effective drivers of development and the greatest equalizer of opportunity is education. The quality of education and the teacher-student interaction impacts the smooth transition of the child from elementary to secondary education. Therefore investing in education in the early years especially among the most vulnerable and marginalized is extremely critical to promoting equity and learning in the long term.”

Henriette Ahrens, Deputy Representative (Programmes), UNICEF India said, “The report notes that significant progress has been made in saving children’s lives, getting children into school and lifting people out of poverty. Global under-five mortality rates have been more than halved since 1990, boys and girls attend primary school in equal numbers, and the number of people living in extreme poverty worldwide is almost half what it was in the 1990s.”

“But this progress has been neither even nor fair. The poorest children are twice as likely to die before their fifth birthday and to be chronically malnourished than the richest. These gaps are not just ethically indefensible but also undermine prospects for dynamic and inclusive economic growth, erode social cohesion and transmit disadvantage across generations. Inequity is neither inevitable, nor insurmountable. Better data on the most vulnerable children, integrated solutions to the challenges children face, innovative ways to address old problems, more equitable investment and increased involvement by communities – all these measures can help level the playing field for children,” she said.

Introducing UNICEF’s ‘FairStart’ social media campaign, Dr. Madhulika Jonathan, Chief of UNICEF Jharkhand said, the campaign focuses on persisting inequities that large groups of children in India face, affecting their survival, growth and development. Every child deserves a fair start in his/her life and deserves adequate nutrition, education, sanitation, protection and health care. The campaign draws attention to the lives of many children who are deprived of these basic rights, often at times determined simply by where they are born. Every child should have a fair and equal chance in life, irrespective of their caste, ethnicity, gender, poverty, region or religion.”

Post the release the Hon’ble Governor fielded questions from young reporters from government schools in Ranchi on a wide variety of questions ranging from child marriage, child labour, gender discrimination, and so on.