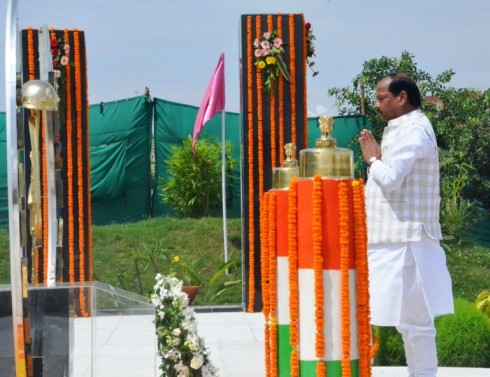 On the occasion,Singh said that due to the brave jawans’ commitment and confidence,the number of incidents of the Maoist violence had come down.”Our jawans confront them and to serve the nation dare to become martyrs”,said the Home Minister praising the works done by these jawans. .

Incidentally,Jharkhand Jaguwar was set up by the state government in 2008.Initially,there were 20 Assualt Groups of Special Task Force(STF)..The force was later given the distinct name of Jharkhand Jaguwar and also a distinctive uniform.

The Home Minister said that in coming days,Jharkhand will be a developed state of the country.”The work to rejuvenate Special Infrastructure Scheme is being implemented.I expect that the state is liberated from Extremist-Maoist”,said the Home Minister.

Even Chief Minister Raghubar Das said that the state government is committed to contain Left Wing Extremists in Jharkhand.