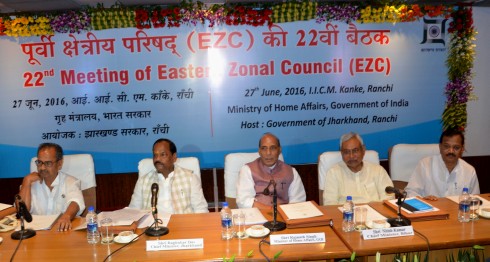 The meeting attended among others by representatives of Bihar,Orissa,Jharkhand and West Bengal has resolved ’50 percent of around 150 issues”,said the Home Minister.

Among major issues discused in the meeting centred around modernisation of the state police forces,ways to contain and end Left Wing Extremism,control smuggling of drugs,measures to be adopted to bring about green revolution in eastern India,development of animal husbandary,fishery,poultry and other issues connected with development.

The meeting,apart from reviewing the decisions taken in the 21rst meeting of the Eastern Zonal Council held in Patna, also discussed division of water from prominent rivers,development of railways,dedicated freighted corridor and multi centred development programmes.

Addressing the meeting,the Home Minister pointed out that the Left Wing Extremists had become a problem in some other states falling outside the Eastern Zone of the country.’The problem can be tackled only through collective efforts,coordination and assistance”,said Raj Nath Singh.