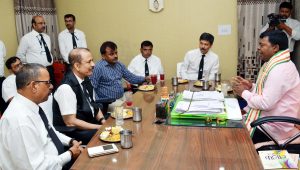 His visit is part of his nation wide tour.he had met his companies staff in Jaipur and highlighted his immediate priority:pushing employees to seek investment from people in cooperative society.

After he arrived with a team of officers and staff of his companies by a charted flight on Wednesday evening,Roy was welcomed by Sahara India Parvar members.

The local newspapers carried a full page advertisement under title-Aapka Atoot Biswas Hamari Takat(Full Faith In You Is Our Strength).It further said:”On the basis of your faith and strength,the Sahara India family begining with investment of just Rs 2000 has acquired property worth more than Rs 1,73,000 crore”,said the add.

Smiling Roy on Thursday,not only interacted his company’s personnel,but also met Jharkhand Minister,Water Resouces,Drinking Water & Sanitation,Chandra Prakash Choudhary and offered him a bouquet of flowers inside his office at Project Bhawan in Ranchi.

In these meeting,held across India to install confidence in his beleaguered staff,Roy is learnt to have driven a single line diktat that he was back and every staff must get back to work.