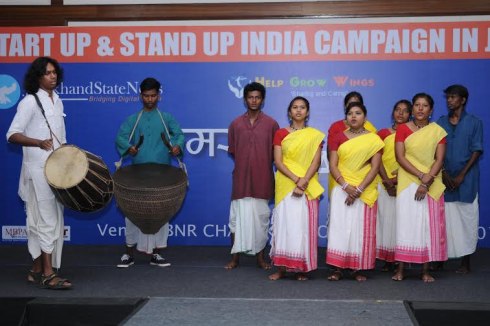 By inaugurating a programme connected with the Start up India campaign,Jharkhand Governor Droupadi Murmu has been welcomed worldwide.

Similarly,Ganesh Mandal states that Governor Murmu is the first representative of the Government of India who had inaugurate a programme for the start ups.

The programme-Namaste Start ups-organised by www.jharkhandstatenews.com in league with a non profit making company-Help Grow Wings-was held inside BNR Chanakya Hotel in Ranchi on Monday.

The aim of the organisers was to promote Startup ventures,to boost entrepreneurship & encourage Startups for job creation.It was attended among others by a number of start ups-both from rural and urban areas-in Jharkhand.They were :

*Though she is a Ranchi based person with disability ,Rakhi Mishra(24) supplies handicrafts on demand.After collecting order through whatsup,she uses courier to supply them to her customers across the state.

*Alfred Frenzy(25),MBA from United Kingdom,serves tribals in Dumka not only by mobilising them to end illiteracy and mal nutrition,but also by making them sale their forest products to whole sellers instead of middlemen.This helps him earn and makes tribals gain higher rates than offered by middlemen.

Also a dozen startups in Jharkhand.They were showcased during a workshop-Namaste Start ups-held inside BNR Chanakya in Ranchi on Monday. The declared aim of the workshop organized by a group of private bodies,was to promote Startup ventures,to boost entrepreneurship &encourage Startups for job creation in Jharkhand.

And,official records showed a clear decline in the number of Naxalite violence cases in Jharkhand where Naxal movement has been going on since past over four decades.For instance,if the number of violence cases was 349 in 2013 and 231 in 2014,it touched the lowest figure of 196 in 2015.Similarly,the death of civilians in Naxa lite violence had come down from 89 in 2013 to 52 in 2014 and 27 in 2015.

The organisers claimed that decline in number of Naxalite violence cases was followed by sprouting of start ups in many Maoist infested areas such as Kanthikund village in Dumka where the Superintendent of Police (SP) of Pakur, Amarjit Balihar, and at least four other policemen, were killed in 2013.

Jharkhand Industry Secretary K.Ravi Kumar said;”We stand committed to promote start ups.”However,none of the government representatives has disclosed how they will do so.