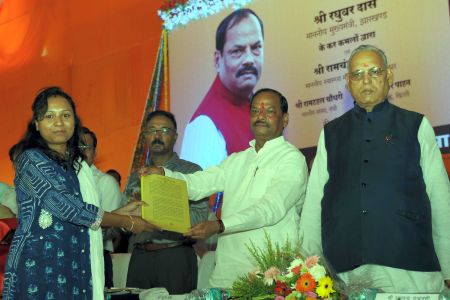 Citizens to get Rs 2 Lakh Health Insurance in Jharkhand,says CM

Jharkhand Chief Minister Raghubar Das on Monday announced that every resident of Jharkhand will get Rs 2 lakh and Rs 50,000 worth Health Insurances for serious and normal diseases respectively.

In addition,the fund will be provided by the government.The comman person will get this benefit at a low cost monthly premium,said the CM while addressing the programme organised by the Department of Health,Medical Education and Family Welfare at Namkom in Ranchi today.

Another announcements made by him were::7 Nursing Colleges will be opened;and the shortage of Nurses in the state government run hospitals will be contained;by training tribal women,job will be provided to them.”The state is suffering from shortage of doctors.This will also be dealt with”said the CM after giving appointment letters to 145 Special Doctors.

“Very soon,one Cancer Hospital at Brambey near Ranchi and Medical College at Dumka,Hazaribagh and Daltongunj will be inaugurated”,said the CM.The programme was attended among others by the state Health Minister Ram Chandra Chandravanshi and Additional Chief Secretary and incharge of Health Department,K.Vidyasagar.

During the programme,the CM also launched Online Drug License Portal and inaugurated the building of the Health and Ayush Secretariat.