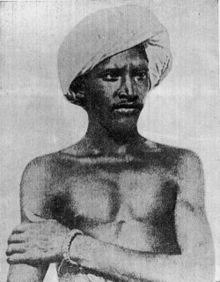 The time has come when the picture or the statue of the state’s hero showing this great tribal freedom fighter Birsa Munda-has been banned.

“Remove this picture/statue showing Bhagwan Birsa Munda in handcuffs”,said a senior officer in the Project Bhawan on Wednesday.

In fact,the Chief Minister Raghubar Das had ordered that handcuff must be removed from the picture of Birsa Munda.”In Independent India,this was not acceptable”,he said.

This means that now onwards the picture of Birsa Munda will not show him in handcuffs.

As it is,Birsa Munda(born on November 15,1875) had spearheaded an Indian tribal indigenous religious millenarian movement that rose in Khunti,Jharkhand in the 19th century during the British Raj.He had died at an age of 25 years inside Ranchi jail on June 9,1900.