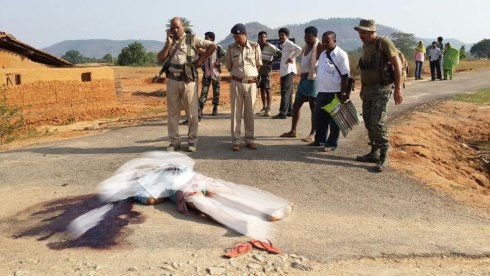 Evenas the Raghubar Das government struggles to maintain law and order  in Jharkhand,incidents of crime cut a sorry picture for the ruling Bharatiya Janata Party.

The latest is the murder of the Inspector of the Special Branch Badri Nath Tiwari alias Binod Tirki.He was shot dead by the CPI(Maoist) ultras at Malam village under Chainpur Police station in Gumla on Monday –Tuesday night.

“He was shot dead after he was picked up from his house and taken to an isolated place.His body was recovered by the police from a road”,said the police on Tuesdaymorning.

On Monday morning,one 5-year old child died and two other kids got injured when a bomb exploded in Godda.These three children were going to attend school.

“Suddenly,Aayush Yadav,5,found a bag in the form of a ball and took it in his hand.Since it carried a bomb,it exploded and he died on the spot.Two other kids -Puja and Anju-who were around him,got injured”,said a senior police officer.

On Monday evening Bauxite king Gyan Agrawal(52) was shot at near ratu Road in Ranchi.Agrawal,who had received two bullet injuries on his heart and stomach,had undergone surgery at a private hospital in Ranchi.

“His condition was critical”,said the doctor.Agrawal owned Bauxite mines in Lohardaga.

In none of these three cases of crime,the police had not made any arrest till noon on Tuesday.

*The picture showing the dead body of the Special Branch Inspector Badri Nath Tiwari alias Binod Tirki who was shot dead by the CPI(Maoist) ultras at Malam village under Chainpur Police station in Gumla,is covered since it is highly gruesome.