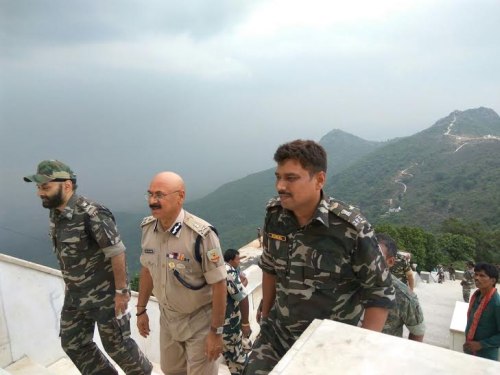 To take stock of the action plan-billed as Operation Hill Vijay and Parasnath Action Paln-DGP DK Pandey together with senior police officers including IG MS Bhatia today climbed up the Parasnath Hill.

As it is,the Parasnath Hills,where as many as 20 Jain ‘Tirthankaras’,or holy men,had attained salvation, are considered one of the most sacred places for the Jain community.

At an altitude of 4,431 ft, the Parasnath hills fan across Giridih, Dhanbad and Bokaro districts. Archaeologists believe some of the temples were constructed as early as 1765 AD.

Despite the religious relevance, the roads leading to the holy site are not developed. The entire area is covered with dense forests. And that itself has in recent times attracted the attention of Maoists.

“Maoists had first set foot in the hills in 1972. But they weren’t successful in their endeavours. Their presence had become stronger since 1976-77.But during the past five years,the security forces had set up their camps and carried a number of operations,demolising their camps and hide-outs”,said a senior police officer.

Many cops believe that Parasnath may no longer be a “base”.But in the past it was a “safe zone” for the Maoists who could cross from Jharkhand to West Bengal,on the one hand,and Orissa,on the othjer hand.Which is why the hills was known as the Red Corridor.

Records show that on Dec 31, 2008,security forces for the first time had come close to flushing the rebels out of the sacred space and reached the hilltop. “To their surprise, they found that the Communist Party of India-Maoist (CPI-Maoist) was preparing to hold an international conference there.”,said a report by Shahnawaz Akhtar,in IANS,November 3,2010.