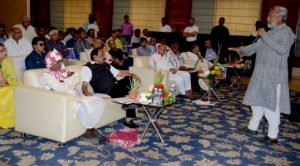 The conservation of water was not possible without people’s cooperation..As such,the public participation should be ensured.Since water is a major resource,its conservation,protection and management can be made by spreading awareness about it.The state government had taken note of the water crisis.

This opinion was expressed by Chief Minister Raghubar Das during his speech as chief guest at the conclave organized jointly by the state Information and Public Relations Department on water conservation under the topic-‘Replenish’ Jharkhand inside BNR Chankaya Hotel in Ranchi on Saturday.

The conclave was a platform where ideas on rain water harvesting and ways to replenish the depleting ground water were exchanged.More,Panel members shared their views on the current scenario in Jharkhand and the measures that needed to be taken to conserve water and replenish the ground water and other sources of water to meet the future needs.

The conclave was addressed among others by Padamshree Ashok Bhagat,Padamshree Simon Oraon and environmentalist Rajendra Singh.