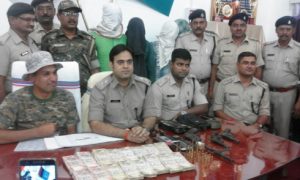 Four persons were arrested in Chatra today on charges of handing over bribe sum of Rs 10 lakh to its SP.

The case is connected with the murder of journalist Indradev Yadav.The police had arrested Maoist Mukesh Ganjhu and put him behind the jail.

The four arrested persons who allegedly belonged to Naxalite outfits called MCC,TPC and PLFI had brought Rs 10 lakh to hand it over to Chatra SP.After arresting them,the police had reccovered this sum from their possession,besides three pistols,29 catridges and 8 mobile sets.