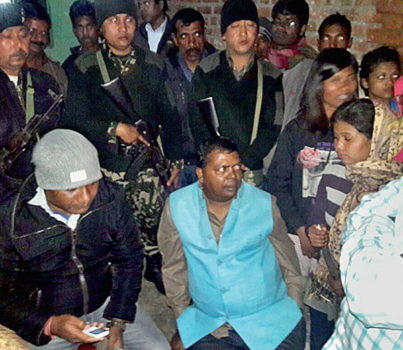 Two incidents of attack on top functionaries of the state government indicate the year 2017 has begun with people’s protest against them.Both incidents took place on the first day of 2017.

The first incident took place at Bodya Tinkoniya Bazar under Kanke block of the Ranchi district on Sunday when the tribals kept state state Water Resource Minister Chandra Prakash Choudhary in their captivity to protest against the death of a resident Kuwar Oraon in road accident.

Oraon,a retired officer of Birsa Agriculture University, had died after a vehicle hit him on the road on December 20.The tribals were demanding construction of a speed breaker.Since this was not made and the consequently they launched attack on the Minister Choudhary who arrived there on Sunday.The tribals also broke the official vehicle of the Minister.

The second incident took place in Kharsawa on Sunday evening when shoes were hurled at Jharkhand Chief Minister Raghubar Das at a programme.Report claimed that ‘hundreds’ of tribals had gathered to pay homage to people who were killed in police firing at Shahid Park in Kharsawa in the state`s Seraikela-Kharswa district.

Das also attended the programme and paid homage to those killed in police firing. Considering the pre-planned protests, heavy security arrangements were made.However,the security forces failed to contain the people who hurled shoes.”This happened when the Chief Minister was leaving after paying homage”,said a report.

Scores of shoes were hurled in protest against the das government getting the state Assembly approve a Bill amending the CNT Act and Santhal Pargana Tenancy Act without holding any discussion on the floor of the house.

However,though none of the shoes had hit him,the CM Das criticised the agitators and said “Its a bad politics to protest in the place of martyrs”,said Das.