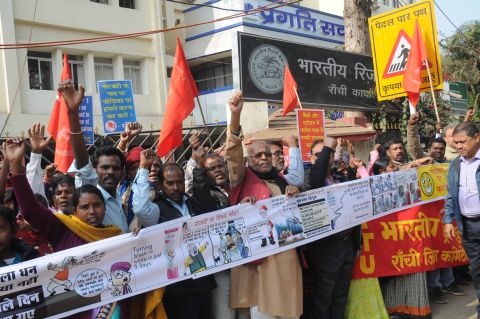 Millions of people in India had welcomed Prime Minister Narendra Modi’s move to demonetize the high currency Rs 500 and Rs 1000 notes.But the communists were opposing it.

In Ranchi,the CPI(M)’s wing Centre of India Trade Union activists protested against the demonetization in front of the RBI building on Tuesday.

“The move is in favour of capitalists”,said a CITU activist.

Asked why it was not against black money holders,fake note suppliers from Pakistan and corrupt people who had hidden millions of rupees by taking bribe,he shouted;”You journalists were products of capiatlists.”