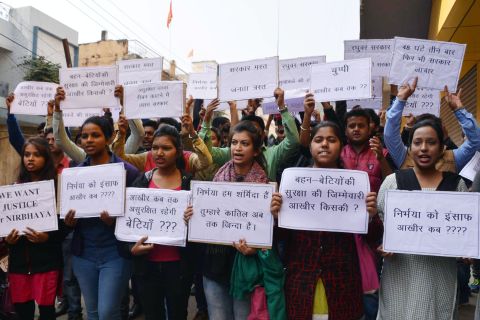 Scores of college students today blocked VVIP Harmu road.All of them were girls.

Many of them were carrying playcards demanding arrest of the culprits responsible for the rape and murder of a B.Tech student near Booty located along the outskirt of Ranchi city on December 15,2016.

The victim,a 20-year-old engineering student was found burnt in her rented house at Booty.Preliminary investigation by police had indicated that she was raped and strangulated to death before being set afire.

Police had rushed the girl’s body to a nearby hospital, though locals said she was already dead. Her parents said they strongly suspected that she was raped and murdered before being set afire. Police sent the body for postmortem.

No arrest was made by the police so far.”The culprits were white collar criminal.Our search operation is continuing and hope to arrest them”,said DGP D.K.Pandey.

The students however were enraged.While protesting against the crime,they sought justice.”It is more than a fortnight since the police were investigating the case.None of the criminals were arrested till date”,said Seema.Kumari,a student who carried a display board.