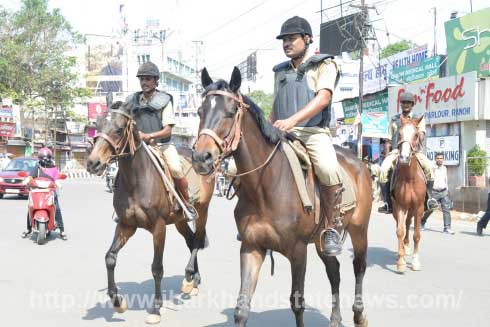 Despite deployment of security forces and clamping of 144 Cr.PC in towns and cities,the state -wide bandh called by Jharkhand Mukti Morcha paralysed life across Jharkhand today when more than 1150 people,including an MLA,were arrested and two vehicles set afire.

In Ranchi,shops,market places,cinema houses and private offices remained closed.Even the traffic was thin as private and public transport remained off the road.

In Jamshedpur,a stationary bus for the employees of Tata Motors was torched by bandh supporters in the early hours, Deputy Superintendent of Police (Jamshedpur-HQ-1) K N Mishra said.

Glass panes of some other vehicles were broken and blockades were put up in Kolhan region, he said.”No vehicle was seen on highways”,said a TV report.

A truck was set ablaze on the national highway near Dhanga in East Singhbhum district, DSP Amit Kumar said.

In Serailela-Kharswan district alone. JMM MLA Dasrath Gagrai was arrested along with 50 other supporters from Kharswan area this morning, SP Indrajit Mahatha said.

JMM Senior Vice President Champai Soren, also an MLA, said the bandh was successful and “historic” while police said its impact was partial.

The bandh called to protest against the domicile policy adopted by the BJP government led by Chief Minister Raghubar Das was supported by RJD, CPI and Jharkhand Vikas Morcha (Prajatantrik).

The domicile policy defines, among other criteria, that anybody who has lived in Jharkhand for thirty or more years for business,employment or any other reason and has immovable property will be considered as a resident of the state.

JMM opposes it and demands that 1932 survey should be made the cut off mark for eligibility of being a resident.

1.Shows Horces Guards parade Main Road near Albert Ekka Chowk,City centre,Ranchi on the day of the state wide bandh called by Jharkhand Mukti Morcha on May 14,2016.

2.Shows shops,market complexes closed and traffic thin along the Main Road,Ranchi on the day of the state wide bandh called by Jharkhand Mukti Morcha on May 14,2016.