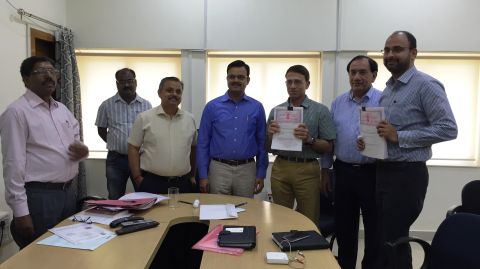 *Picture shows E & Y Agency representatives and Jharkhand governmentâ€™s IT Department Secretary Sunil Kumar Barnwal who signed a contract agreement on April 12,2016 to set up IT City in Ranchi.

The E&Y Agency and Jharkhand government’s Information Technology Department today signed a contract agreement to select an agency to help set up an IT City in 170 acres land in Ranchi on PPP mode.

The selected company is supposed to pick up Start-ups to help the state government chalk out plan to establish Innovation/Incubation Centre.

“Taking note of the ongoing works in the IT sector across the world,the E & Y Agency will analyse the socio-economic condition prevalent in the state and help the state government formulate its IT policy”,said the state IT Department in a statement adding that the E & Y Agency will hold “Road Show,IT Summit in the country and abroad.”