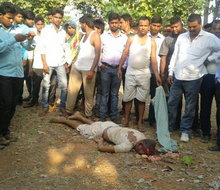 *Picture courtesy bhaskar.com shows residents of Birni village in Giridih protesting against the elephants who had trampled to death 50-year old Devraj Sao.

A herd of wild elephants trampled a man to death in Jharkhand’s Giridih district,police said.

The victim was identified as Devraj Sao,50-years old.The wild elephants attacked this morning when Sao had gone out of his home to attend to nature’s call.

The elephants raided a Birni village of Giridih district, about 170 km from Giridih, destroyed the standing crops and trampled the man by cornering him from all sides.

“These wild elephants get drunk and go after the crops and humans in villages”,said a resident of Birni echoing the sentiments of many villagers.

Report said,the angry over the incident, the villagers blocked the Giridih- national highway for over three hours and demanded compensation for the family of the killed man.

A report claimed that over 750 people have been trampled to death in the last eight years in the state.