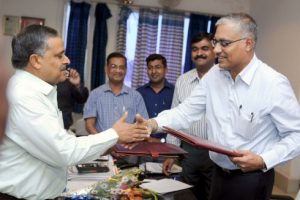 “Now we will acquire (700-800 acres)land for the project through private process”,said Sesa Goa’s Chief Executive Officer K.Kishore Kumar who together with Jharkhand’s Industry Secretary UP Singh signed the MoU inside Nepal House in Ranchi.

The project is learnt to be part of Goa-based iron ore miner’s plans of venturing into the steel sector by setting up of 2-3 plants of similar capacity in the country.
Incidentally,the company already has a prospecting licence of an iron ore mine in West Singhbhum district of the state for carrying out mining operations.

Recently, the Jharkhand government had cancelled an earlier MoU signed with Sesa Goa in September, 2006 for a 0.5 million tonnes pig iron and coke oven plant, as the company had not made much progress for the said projects.

It is learnt that that MoU for the 1.5 MT steel plant is separate and should not get compared with the cancelled MoU.”This (steel plant) MoU has nothing to do with that (the cancelled MoU). These are two different plans,” said a state government official.