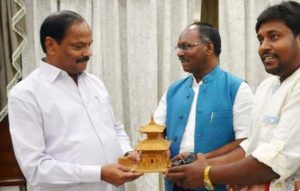 On his return from Nepal,Shivshankar Oraon today met Jharkhand CM Raghubar Das and apprised him of his achievements in Nepal.

In fact,as the CM Das’s representative,Shivshankar,BJP’s MLA from Gumla,had participated in the first national meeting organized by Madhesi Janadhikar Forum(Loktantrik) at Biratnagar in Morang district,Nepal on May 2,2016 and read out the CM’s message to the people of Nepal.

“Nepal- India have a strong relationship and both countries have an identical culture.Between both these countries,the tradition has been going on and gained grounds since ages,always strengthening a sense of brotherhood and ideological unity”,stated the CM’s message read out by Shivshankar.

After returning from meeting Shivshankar met the CM and handed over the momentum he had received on his behalf at the national meeting at Biratnagar offered to the CM.Shivshankar was accompanied by Bhushan Bhagat.