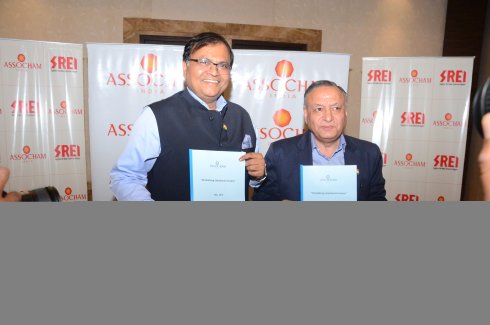 Apex industry body ASSOCHAM has come up with a proposal and offered it to the Jharkhand Chief Minister Raghubar Das for creation of a one-time Rs 10,000 crore infrastructure development fund (IDF) jointly by the state and Central government to transform the state into a major investment destination in eastern India.

“With a view to cultivate a vibrant entrepreneurial ecosystem, the state government should set up a ‘Jharkhand entrepreneurship mission,’ on the public-private partnership (PPP) model thereby facilitating 50 rural business and convenience hubs to provide services and facilities to both rural industries and households,” suggested an ASSOCHAM study titled ‘Revitalising Jharkhand Economy,’ submitted to the Chief Minister by chamber’s president, Sunil Kanoria and secretary general, Mr D.S. Rawat today.

“These rural hubs will act as catalysts for harnessing entrepreneurial talent in Jharkhand, tap its rich rural markets and create ample of employment opportunities across the state,” said Mr Kanoria while releasing the paper at a press conference.

“The mineral-rich Jharkhand has failed to attract investors both domestic and global as the outstanding investments attracted by the state have declined continuously since 2010-11 till the last fiscal year of 2015-16 i.e. from about 26 per cent to (-) 2.5 per cent,” noted the study prepared by The ASSOCHAM Economic Research Bureau (AERB).

Though Jharkhand received an overall score of 63.09 per cent and was ranked third amid states in terms of ‘Ease of Doing Business,’ however ASSOCHAM opined that state needs to overcome a number of hurdles related to infrastructure development for realising the state’s true growth potential.

With investments worth over Rs six lakh crore, Jharkhand accounted for about four per cent share in the total outstanding investments worth about Rs 170 lakh crore attracted by both public and private sectors from domestic and foreign sources as of FY2015-16, noted the study.

Manufacturing sector accounts for almost half of the total investments attracted by Jharkhand followed by electricity (38 per cent), mining (six per cent), non-financial services (five per cent) and irrigation (one per cent).

Private sector accounts for about 67 per cent of the total investments attracted by Jharkhand, while the state’s share works out to be 2.3 per cent of total outstanding investments undertaken by public sector across India.

On the employment front, the ASSOCHAM study highlighted that in terms of about nine lakh job-openings across India in last quarter of last fiscal, Jharkhand despite having an advantage of significant industrial base could generate a meagre 3,234 jobs across the state during this period.

Services sector accounted for lion’s share of over 41 per cent in terms of job openings in Jharkhand in Q4 FY16 followed by manufacturing (23.2 per cent), ITEs (13.4 per cent), banking financial services & insurance (12.0 per cent) and construction & real estate (7.3 per cent).

“Jharkhand which is endowed with abundant natural resources is underperforming and loosing attractiveness as a lucrative investment destination for industry, as such the state government needs to adopt a better strategy for growth and fiscal management,” highlighted the study.

ASSOCHAM has suggested the state government to take measures for acceleration of entrepreneurship and business creation to tap rural markets of Jharkhand.

ASSOCHAM has also suggested the state authorities to come up with an inclusive agenda of development and create an economic ecosystem whereby issues related to the masses – employment, safety and security and others will be addressed and it will further facilitate entrepreneurship for individuals and small, medium and large enterprises.