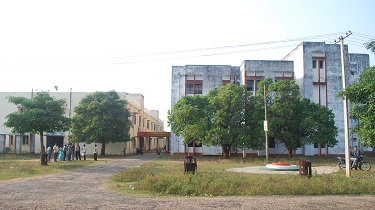 Representational Picture shows a building in Dumka where BJP leader was shot dead on Tuesday.

The murder of Bhagawat Rout in Dumka last night has shocked the party workers in Jharkhand.

Rout,56-year old man who had quit the Jharkhand Mukti Morcha to join the BJP in 2014,was reportedly shot dead near his residence on Tuesday night at around 8 pm.”Two armed men were moving by a mo-bike.One of them shot at him”,said Sinha.

Later,Rout,who was a member of Dumka District Board, was rushed to a nearby hospital in Dumka where he was declared ‘brought dead.’

While his family comprises three children and wife Champa Devi.,Rout’s uncle Vivek was attached with the JMM president and MP Shibu Soren.

Though the cause of his murder was not known,the police have nabbed two persons.”Investigation is on”,said Dumka SP. Vipul Shukla.