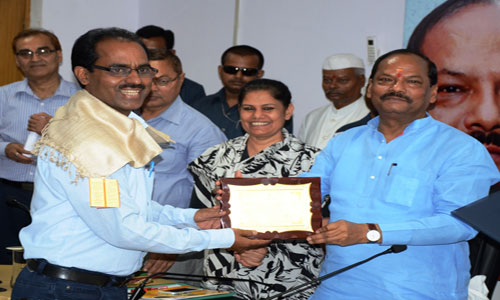 Each one of them was given a citation,a cheque of Rs 21,000 and a shawl put on his body by the CM to honour him.

As it is,the pre-budget workshops were organised by the state government in five Divisional headquarters as per the order of Jharkhand Chief Minister Raghubar Das.

Among them,the following citizens had come up with innovative and useful suggestions.They were:

2.Devraj Prasad,Educationist,Simdega.He had suggested that ‘Big halls’ should be constructed for the study-examination purpose.

3.Amitabh Bharti,Educationist,Gumla.He had sought the construction of Multi Purpose Hall in every District headquarter.This advise of his led the state government formulate a plan to implement his suggestion.

4.Rishi Kumar Tiwari,Agriculture Representative,Chacharia village under Meral block in Garhwa district.He had appealed to the state government to come up with a scheme to provide solar light system on a high rate of subsidy.Following his suggestion ,the Energy Department has started the scheme offering solar light system to people on subsidy mode in the current fiscal-2016-17.

They were honoured by the CM inside the Audrey house,Suchna Bhawan,Ranchi on Tuesday.They appeared proud of the Das government’s move.

*Pictures show the CM Raghubar honouring men whose ideas found place in the form of schemes in gthe state government’s annual budget 2016-17 in Jharkhand on May 3,2016