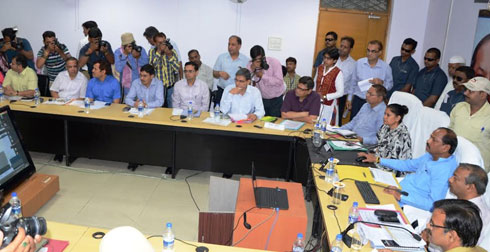 Introduced by the Das government on May 2,2015,Jan Sambad office inside the Suchna Bhawan in Ranchi was decked up.

In fact,the Mukhya Mantri Jan Sambad is a centralised computerisation system.After assumping power with the backing of a clear majority of MLAs in 81 MLAs strong Jharkhand Assembly,the Das government had felt it necessary for quick grievance management redressal and monitoring of people’s grievances..

‘In this connection,the state version of CPGRAMS(Jharkhand Samvad Evam Samadhan) was sought to be implemented in the state.It also has a website-www.jharkhandsamadhan.nic.in.Also,the helpline number 181 was introduced for the same cause.

The move sought to provide a common interface between the citizens and the government.Any citizen with a grievance was entitled and welcomed to get online registration.It was forwarded by Nodal officers who tried to respond by redressing their grievances.

Whenever the Nodal officers failed to resolve any genuine grievance of the citizen,Barnawal took note of it and adopted appropriate action.

However,there were many shortcomings-portal was not updated;though registered grievances were to be redressed in a time frame,many problem raised by the citizens were not resolved despite repeated attempts of the Nodal officers and the CM’s Secretary.