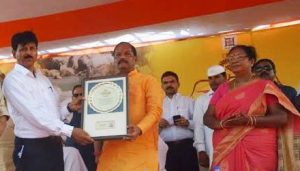 After inaugurating the two -day Mahotsav beginning Saturday to end on Monday,the CM announced to promote Ramrekha Dham in tourism circuit by setting up a Ropeway to reach it.

On this occasion,the CM awarded two school girl students who had refused to marry for pursuing education.Each was handed over a cheque of Rs one lakh.Also the family of the Veer Chakra recipientJohn Brito Kido.

As it is,Ramrekha Dham is a well known tourist destination in Jharkhand.It is situated at a picturesque place on top of a hill and every year there is a big fair during Kartik Purnima.

It is said, that Lord Rama along with Sita and brother Laxman had visited this place and had left his mark (Foot prints)there. Some archaeological structures like agni kund, charan paduka, sita chulha, gupt ganga etc. shows that during Banwas period they followed this path.The Kaisalpur-Birugarh Royal family discovered and developed this place.