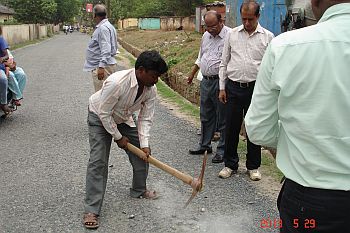 Jharkhand Governor Syed Ahmad today inspected one under construction road in Ranchi and directed the concerned officials to inquire into whether it was being constructed as per the specifications mentioned in its job order.

This road falling right behind the Raj Bhawan connects Ratu road with Kanke Road.It was being constructed by the Ranchi Municipal Corporation(RMC).

Since corruption was rampant and the rate of commission paid by the contractor for fetching the contract varied between 25 percent to 40 percent of the total outlay of the project,the quality of most roads in Jharkhand was very poor.So much so that soon after its construction,many roads had in the past collapsed.

This time,following a complaint lodged by a citizen,Governor Ahmad swung into action.

But,before he together with his Principal Secretary NN Sinha arrived on the spot this morning,officials and staff of the state road construction department,who were incharge of the quality control,had dug out the under constructed road near the Durga Mandir and collected samples of the road materials.

Soon after his arrival,Governor Ahmad took a few steps and saw that this road under construction had developed potholes at a number of places.”Make available the report to me as soon as possible”,ordered Governor Ahmad.

When a media person asked him for his reaction,Governor Ahmad said:”Take my reaction after I act on this issue.”Few heads of the RMC are likely to roll.