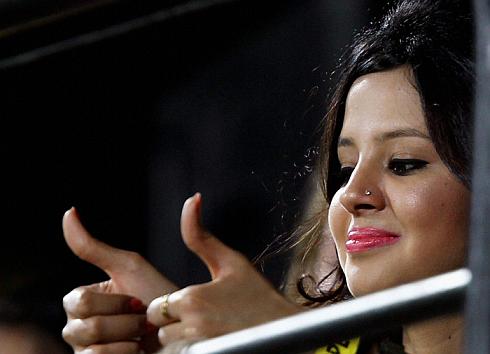 She was seen sitting with Vindu Dara Singh.After Singh was arrested,the police took note of this picture and the media splashed it with a story saying Sakshi,wife of Mahendra Singh Dhoni,can be interrogated in the spot fixing controversy.

She had not reacted on her ‘involvement’ which many people who know how honest and nationalist was the Dhoni family,believe was a ‘cock and bull story’carried by the media without any sense of journalistic ethics.

But on Thursday,Sakshi tweeted: “Have we all heard the song -Titanium by Sia and David Guetta, for those who haven’t Plzz do listen to it.”

The lyrics of the song goes as ‘ You shout it out/But I can’t hear a word you say/I’m talking loud not saying much/I’m criticized but all your bullets ricochet/You shoot me down, but I get up……’ indicating that Sakshi is just not bothered about it.