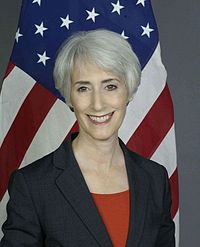 Ahead of US Secretary John Kerry’s visit to India in June, its Under Secretary for political affairs Wendy Sherman met India’s Foreign Secretary and External Affairs Minister Salman Khursheed in New Delhi today .

Later,she had an interactive session with the media.

Question: India has sought access to David Coleman Headley and Tahawwur Rana. Is there any headway, or possibility that [inaudible]?

Under Secretary Sherman: As you know, prior to the conviction recently of Mr. Headley, there had been access and we understand that there is request for more. I know there was a Homeland Security Dialogue that was just completed in Washington. That is the channel along with our Department of Justice to resolve this request and I am sure that both our governments will work through this in whatever way is appropriate.

Question: You mentioned that there is a dialogue with India on the energy cooperation side as well. Since India has cut significantly its imports from Iran, so is there is a possibility that we may get a waiver again?

Under Secretary Sherman: I think that India has really made tremendous progress in reducing the level of its importation of Iranian oil. India has long been a leader in non-proliferation. They have stood side-by-side with all of us in the international community to say that Iran should not acquire a nuclear weapon. We greatly appreciate all of the leadership that India has provided, including their enforcement of sanctions. That decision will be made shortly. And all of the data is certainly pointing in a positive direction.

Question: The Afghan President has recently sought military help from India. Do you think India can play a role in the peace and security in Afghanistan?

Under Secretary Sherman: I think India is a crucial and key player in the future security and development of Afghanistan – both bilaterally and regionally. India has already made bilateral investments in Afghanistan, including as you know in an iron ore mine, but in many ways, providing capabilities and technical assistance. India has also been a leader in the new Silk Road and the Heart of Asia process. And anything that happens in this region of the world is going to be positive when India is engaged.