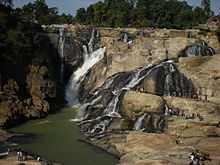 Sajal Kumar Chakravorty, Jharkhand’s Tourism Principal Secretary has taken the initiative to make Dassam Falls accident free, something that no one has done in the past.

This natural cascade, 44 km from Ranchi across the Kanchi River, a tributary of the Subarnarekha River is a picturesque tourist spot.

At Dassam, water falls from a height of 44 metres (144 ft). There are some death traps where a number of people have died due to drowning. In fact,every year whenever a casualty was reported ,the media highlighted it and the concerned state government officials promised to do away with these death traps.But nothing happened.

Chakravorty, an IAS officer, has mobilized the Army and the Central Coalfields Ltd to identify the death traps, suck out the water and fill them up with concrete so that no body drowns there.Now,he plans to develop the Dassam Falls as a water park. “We are very happy”,said Nagina Manjhi, a fisherman,who resides near Dassam.