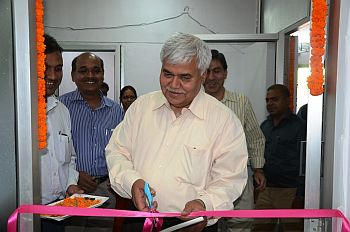 Jharkhand Chief Secretary Ram Sevak Sharma was tipped to be honoured on behalf of the Unique Identification Authority of India (UIDAI) during the Annual Laureate Medal Ceremony & Gala Awards Evening on June 3, 2013 at the Andrew W. Mellon Auditorium in Washington, D.C.

Sharma,who was the first Director General of the UIDAI responsible for its institutionalization and accomplishments till recently, was authorized by its chairman Nandan Nilekani to receive the medal and the honour.

In fact, UIDAI was among 267 names that were selected from across the globe by the USA’s Computerworld Honours programme,2013.

On this 25th anniversary of the award program, Computerworld continues to recognize individuals and organizations that create and use information technology to promote positive social, economic and educational change. The UIDAI was selected for its role in the economic development.

Sharma was not available for comment .But, it is learnt that due to some ‘technical reasons’, he could not go. “Now on his and UIDAI’s behalf some other person may receive the medal”, said a source close to Sharma.