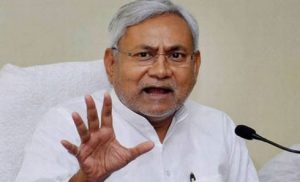 After Bihar Chief Minister Nitish Kumar launched liquor ban in Bihar and consequently liquor began to be smuggled into its areas of jurisdiction from ,UP,West Bengal and Jharkhand,Kumar is learnt to have moved forward to mobilise women to clamp liquor ban in these states.

To begin with,Jharkhand where his party lacks any representative in its Assembly, appears to be his target number one.Result?

Members of Nari Sangharsh Morcha met Kumar at his 7 Circular road residence in Patna today and offered an appeal to him to come to Dhanbad in Jharkhand on May 10 to start a campaign to compel the BJP government led by Chief Minister Raghubar Das to introduce liquor ban in Jharkhand.

The Morcha plans to hold a meeting at Town hall in Dhanbad where Kumar is expected to claim success of liquor ban step taken by him in Bihar and appeal to women to launch agitation seeking liquor ban in Jharkhand.