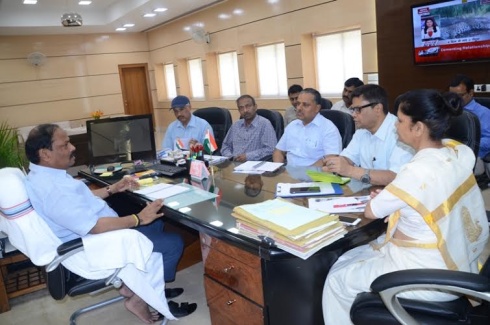 Jharcraft,a state government body,was established in 2005 with a mission to change lives through creation o new opportunities that would effectively,efficiently and positively affect the lives of a large number of poeople across the state.

The CM also directed the concerned officers to start the process to set up Jharcraft’s centre at 10,000 square feet area in HEC,Ranchi and other cities so that it gets a big market and Jharkhand’s art and craft become popular across the country.The CM was reviewing the works of Jharcraft inside Project Bhawan in Ranchi today.

“Jharcraft should be run professionally.The work should begin on a mission mode.By purchasing products from it,Jharcraft will gain a big market.All those who were involved in the Prime Minister Jan-Dhan Yojna should be linked with it”,said the CM.

*Picture shows Jharkhand CM Raghubar Das holds a review meeting on the works of Jharcrat inside Project Bhawan,Ranchi on April 27,2016.