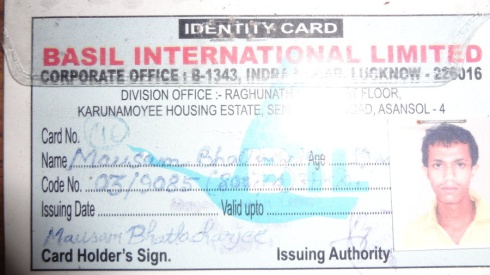 Jharkhand Development Commissioner Amit Khare today informed that the state government has directed Dhanbad Deputy Commissioner to attach the property of Basil International Ltd,a non banking company, for not paying deposited chit fund amounts to its depositors, send a copy of its order and list of attachments to SEBI/ CBI and after seeking their opinion on its property take appropriate action.

This means that this non banking chit fund company is set to face the music.Its property is bound to get seized and auctioned in wider interest of its depositors soon.

Khare informed that this directive was given in accordance with the law and in view of the depositors’ interests.He said that after complaints were registered,the state government had issued a directive to hand over a show-cause as per the law on on March 29.

Though none of its owner was present in the court, Basil International Ltd’s Managing Director Nirmalendu Bhomik on March 29 had handed over a letter stating that since the case was pending in the court,its property can not be attached.

Earlier,Kolkata based Basil International Ltd as well as its promoters and directors were asked to refund money collected,with interest that were promised to the investors.

Market regulator Securities and Exchange Board of India (SEBI) had imposed a four-year ban on this company and 12 individuals, including directors, from accessing the capital market for illegally raising funds from investors.

The company has been directed not to access the capital market “from the date of this order till the expiry of four years from the date of completion of refunds to investors,” according to SEBI’s 28-page order.

In case of failure of these entities to comply with the directions, SEBI is on record having said that it would take appropriate action, including recovery proceedings.

The company as well as its promoters and directors have also been asked to refund the money collected through issuance of redeemable preference shares (RPS), with returns that were promised to the investors.

It was found by the SEBI that these shares were issued in violation of Companies Act norms.

“In case of delay in making the repayments, the company, its promoters and directors, shall jointly and severally, return the money collected from its investors with an interest of 15 per cent per annum at half yearly intervals from the date of this order till date of actual payment,” it said.

“The above directed interest on the delayed payments shall be over and above the returns that are due to its investors of such instruments,” the order said.