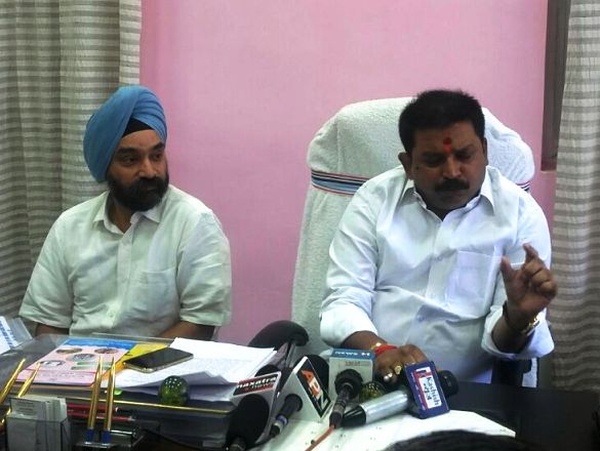 When the socialists and labour unions across the world will celebrate International Labour Day on May 1,2016,the BJP government in Jharkhand will make operational 24X7 Helpline for workers.

Announcing it at Nepal House in Ranchi today ,Jharkhand :Labour Minister Raj Paliwal,accompanied by its Principal Secretary MS Bhatia,informed that the state government plans to introduce many schemes on the Labour Day.

These include its decision to come up with the online facility for workers to register themselves and observe the Labour Day twice-first on May 1 and second on the Hindu festival date of Bhagwan Vishwakarma.

Notably,on May 1,2016,the state Labour Department plans to provide gits such as bi-cycles,shoes,helmets and sewing machines.The Minister told media persons that on the occasion of the International Labour day,the state will observe “Majdoor Adhikar Diwas”(Labour Right Day) across the state and workers doing jobs honestly will be awarded.

As per the estimate made by the Labour Department,nearly 50,000 workers connected with different development schemes are exxpected to benefit from the state government’s move.

Toward the same end,the workers are planned to be registered during April 26-28.”All those who will be identified as belonging to un- organised sector will be awarded at the district level.For this scheme,Rs 150 crore lying in the Mukhya Mantri Sanirman Karmkar Kalyan Board will be utilised”,said the Minister in presence of Principal Secretary.