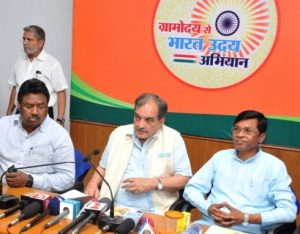 Ahead of the Prime Minister Narendra Modi’s visit to Jamshedpur on April 24,the Union Rural Development Minister Birendra Singh today arrived there to take stock of the situation.

Gramuday Se Bharat Uday campaign was launched by the Union Government on April 14 -125th birth anniversary of Dr BR Ambedkar.It will conclude in Jamshedpur on April 24 when nearly 6000 Panchahayat representatives from across Jharkhand will be present.The Jharkhand government led by Chief Minister Raghubar Das is busy preparing the event in league with the Union government.

The programme is slated to take place at the JRD Sports Complex in Jamshedpur.As per the plan,the PM Modi is also slated to launch online the NTPC’s 800 MW thermal power plant at Patratu.