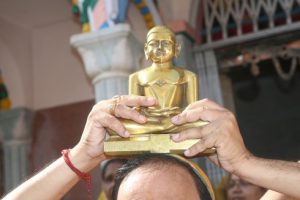 In temples all over Ranchi and its adjoing areas in Jharkhand today celebrated Mahavir Jayanti, the birth anniversary of the founder of Jainism, Vardhamana Mahavira.

The celebrations vary from sect to sect and each temple has its own way of commemorating the festival.All of them performed rituals.

At Parasnath,the idol of Mahavira was worshipped by the devotees.Some of them carried out the idol of Mahavir on a chariot and bhajans are recited along the way while at others, the idols are given a ceremonial bath. During the day, the community members performed charitable deeds from providing food to donating clothes.

While lectures by monks and nuns were held at temples, where they preached the path of virtue as defined by Jainism, donations are also collected for charitable deeds.