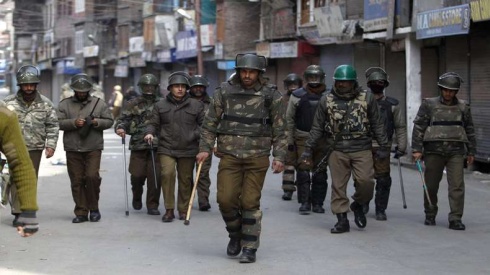 Security forces moved around as shops and market places remained closed today in Hazaribagh where curfew was clamped on Sunday night.

No incident of violence was reported on Monday when curfew remained in force.The curfew was promulgated after communal violence over Ram Navmi processions caused a group clash in Hazaribagh on Sunday afternoon and evening.

The report said that violence had occurred when a Ram Navmi procession was stopped and the use of loudspeaker was objected by some members of the minority community.”This caused clashes between two groups with the result several people and the policemen were injured”,said an eyewitness.

Soon,nearly a dozen shops and vehicles were set ablaze by the mobs.This prompted the district administration to clamp curfew on Sunday night.

Incidentally,Hazaribagh,represented in the Lok Sabha by the BJP’s Jayant Sinha,Union Minister of State for Finance,who is the son of former Union Finance Minister Yashwant Sinha,has been a communally sensitive district where communal violence has taken many lives in the past.