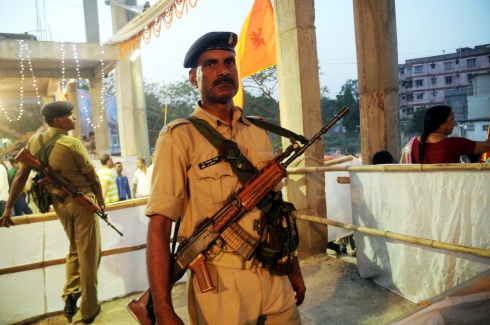 Peace has begun to return in Bokaro and Hazaribagh district in Jharkhand.

However,despite curfew in the area,a vehicle was set ablaze today in a corner of Bokaro.The rest areas in these district remained free from any violent incident today when the security forces were deployed to maintain law and order there.

On Friday night,curfew was imposed in four police station areas of Bokaro after communal violence created by pelting of stones at a Ramnavmi procession.

Alongside,violence also took place in Hazaribagh district where stones were pelted at a Ram Navami procession.

Later,curfew was imposed in Bokaro.In Hazaribagh,the situation was reported to be under control,said Jharkhand Police spokesman S N Pradhan said.

A report quoting eyewitness said that there were violent clashes between members of two communities in Siwandih suburb of Bokaro steel city when a Ram Navami procession was stopped and pelted with stones.”a number of people were injured in the violence, including some journalists and government officials.A mob also burnt three vehicles”,said the police.

In Hazaribagh, the trouble spot was Keredari where violence erupted after a Ram Navami procession was stopped. Several people were injured and some houses were set on fire.