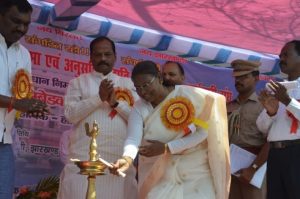 The top brass of the BJP led Jharkhand government today celebrated the 125th birth anniversary of one of our nation’s most inspirational leaders, Babasaheb Dr. B.R. Ambedkar.

This is for the first time,Jharkhand Governor Draupadi Murmu,Chief Minister Raghubar Das and a dozen of MLAs and Ministers including CP Singh gathered and,after offering flowers to Babashaheb,stood on the dias and spoke about vast achievements of the Father of the Indian Constitution and its first Law Minister

The event is significant for it also marks the centenary anniversary of Babasaheb’s graduation from Columbia University.Eventhough the celebrations were intended to honour Babasaheb and his life’s work, they are not limited to only that.

The ruling BJP and the opposition Congress Party too took up an opportunity for honest engagement with the Indian public, and Dalits in particular, regarding the party’s greatly misunderstood relationship with Babasaheb.

In any case,neutral observers say these ruling BJP and the opposition Congress used the occasion for their own political gains.

2.Top functionaries including Jharkhand Governor Draupadi Murmu and Chief Minister Raghubar Das paying tributes to the statue of Dr B R Ambedkar in Ranchi on April 14,2016.