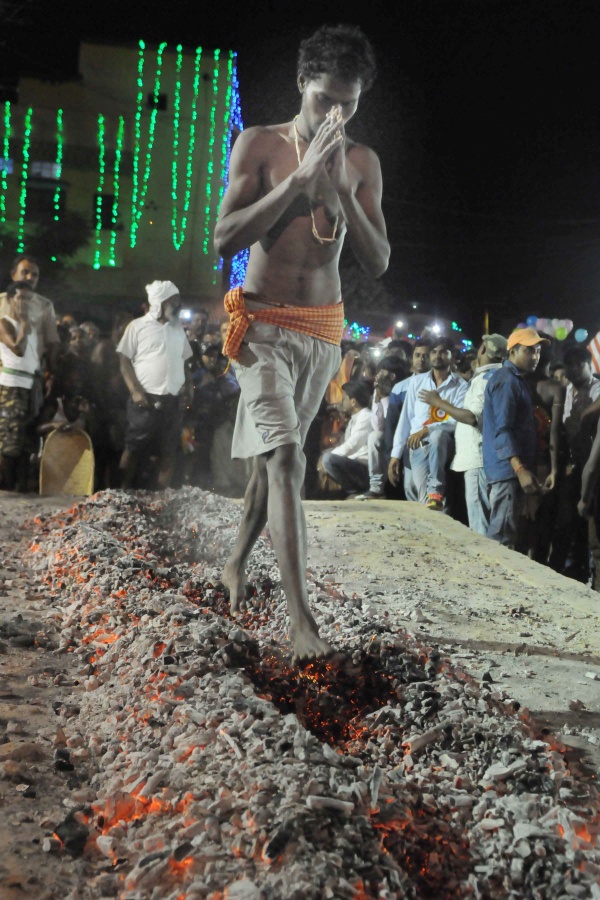 With Sarhul festival over on Sunday,Manda festival began on Wednesday.Both festivals are celebrated by tribals in Jharkhand.

While Sarhul is celebrated to mark beginning of New year by worshiping trees,Manda is celebrated on hot summer days to pray for rain during the monsoon season.

Today,scores of tribals carried stick as they prayed and walked barefoot on the packs of fire.The festival involves various rituals rituals to bring blessings of the Hindu God Lord Shiva.

The reason for this festival is to appease the Sun God and pray for rain during the hot and dry month.During this festival, processions are brought out from the premises of the temple of Hindu God Lord Shiva and taken to other villages.

At Chutia in Ranchi,many tribal participated in annual festival for good farming, prosperity and good health.In tribal community,there is a belief that Lord Shiva fulfills the desire of those people who participate in the Manda festival.

1. A tribal women devotee walk on a burning coals to pay tribute to Lord shiva during Manda festival in Ranchi on Wednesday early morning. Photo-Ratan Lal

2. A young devotee performs an acrobatic during the Manda festival at Chutia in Ranchi on Wednesday. Photo-Ratan Lal

3. People watch acrobatics being performed by a devotee during the Manda festival at Chutia in Ranchi on Wednesday. Photo- Ratan Lal