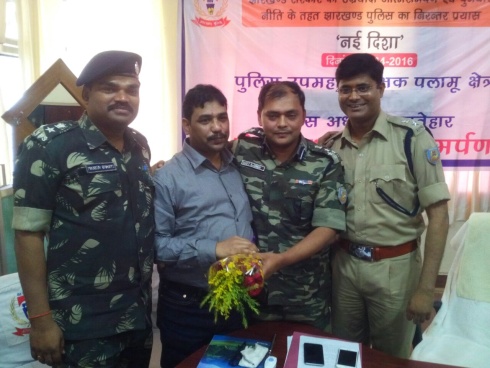 It was the day of the police against the Maoists.

In Latehar district,top CPI(Maoist) zonal commander Dinesh Yadav,who was wanted in more than a dozen criminal cases and against whom the police had declared a cash award of rs 25 lakh,surrendered before the DIG Saket Singh.

Yadav led the CPI(Maoist) ultras in Latehar,Palamau and Lohardaga.His surrender means that while the state government will award him benefits as per its ‘surrender policy’,CPI(Maoist) is bound to lose weight in these areas.

Alongside,three other Maoists were arrested after a gun battle in Khunti district.Report said that the gun battle between security forces and Maoists belonging to the CPI(Maoist)’s rival outfit People’s Liberation Front of India(PLFI) took place on Monday night near Katingkel village of Khunti district,nearly 70 km from Ranchi,

The police is learnt to have seized one rifle,live catridges and incriminating documents from the arrested Maoists.