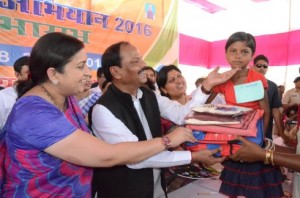 Union Education Minister Smriti Zubin Irani today announced that the Scheduled Caste and Scheduled Tribe students of the Indian School of Mines(to be turned as IIT)Dhanbad will not have to pay any tuition. fees.

“The ISM Dhanbad will be made tuition free for the ST and SC students”,said Irani while addressing the people and launching the state government’s campaign-‘School Chale,Chalaye'(Go to school,run it)- at Kalamati in Khunti district near Ranchi today.

She observed that the promotion of teachers will be linked with their contribution toward the growth and development of students.

In response to a demand raised by Jharkhand Chief Minister Raghubar Das,Irani declared that a new educational institution-‘Composite School’-will be set up in Ranchi,Palamau,Dumka,Chaibasa and Hazaribagh.

As it is,Composite School means it is a secondary school operational in many parts of Europe and Canada where it offers academic,commercial and education in industrial subjects.

“Like any private school,it will provide all facilities including trasportation and smart class”,said a press release issued by the state government.