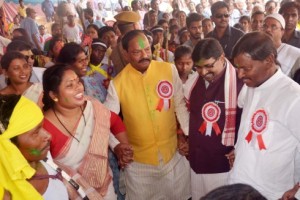 In a major move meant to open a big box of appointments in Jharkhand,the State Cabinet headed by Chief Minister Raghubar Das today adopted a domicile policy in accordance with the law.

As per the policy, the survey record of rights and ownership would be the yardstick to determining local residents for recruitment in the state services and appointments across the districts,blocks and panchayats.

The domicile certificates are to be issued to those fulfilling the following conditions.

B.Land less person who was identified as a resident of the area by the Panchayat.

C.A person or persons’ parents who was born,had done his/her matriculation,worked in the state as staff/officer of the State government/Central government/Public Service Company or any businessman residing in any area of the state for atleast ten years.

Since the state government has followed the Supreme Court’s directive not to go beyond 50 percent reservation,it can stir a hornet’s nest in Jharkhand where some tribal outfits had staged demonstrations in support of their demand for 60 per cent reservation for the scheduled tribes.