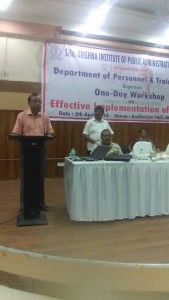 Although no much headway was made to popularise it in Jharkhand,a workshop was held today on Right to Information Act at Sri Krishna Institute of Public Administration(SKIPA). in Ranchi.

“It is a matter of happiness that the people have become conscious of the RTI Act”,said SKIPA Director General Sudhir Prasad.”Its uses can help the government develop transparency in the process of governance.”

Toward this end,SKIPA can play the role of a link..SKIPA can bring out the record of successful cases of RTI in promoting transparency and containing corruption”, opined Prasad while speaking at the workshop inside SKIPA auditorium.