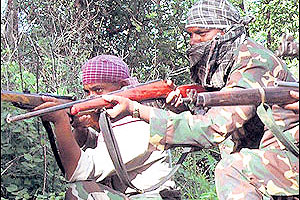 A spectare is hunting security forces in Jharkhand-spectare of Maoists’ property.

Long after shifting from the old ideology of Karl Marx and Mao Tse Tung to build and establish Communist State to robbing and killing innocent people and extorting money from them,many Maoists are learnt to have gained properties worth crores of rupees.

This amazing fact was revealed by a report prepared by the Special Branch of the Jharkhand Police in response to a directive by the Union Home Ministry.The report,based on the findings of an inquiry during the past two years,indicates that many veteran Maoists who were residents of Jharkhand, had bought land plots,houses and other property in Bihar.

“The details were sought from the Bihar police”,said a senior police officer.

If he is to be believed,the records of property acquired by three famous Maoists,who were wanted by the security forces,were already prepared by the police.They were:

*Nanho Mochi alias Prabhat:Area Commander of CPI(Maoist).He,a resident of Panki in Palamau, owns property worth Rs 2.5 crore in Kanke,Ranchi.He spends nearly Rs 30,000 on school education of his kids In Kanke,Ranchi.