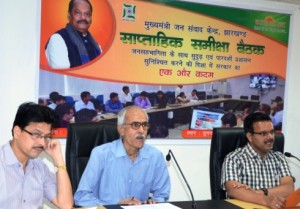 In the weekly review of meeting of the Chief Minister’s Jan Samvad programme held inside Suchna Bhawan in Ranchi today,Sunil Kumar Barnwal,Chief Minister’s Secretary,expressed concern over non-availability of toilet for girl students at Jamtara college in Jamtara.

Through video conference,he pulled up concerned officials over it and asked why the Education Department did not fulfill its responsibility.He ordered to set up a team of officials to inquire into the allegation that the college management had not taken any step to build the girl’s toilet during the past nearly ten years

Reacting to another complaint that food materials were not made available to Aanganbari Kendra at the Dalit dominated Pardwachechri village in Palamau, Barnwal directed concerned officers to identify the culprits and take action against them.

As it is,a centralised computer based system operating through video conference is called Chief Minister’s Jan Samvad programme.Launched by the BJP government led by Chief Minister Raghubar Das,it is held once a week.

It is implemented with a web application having facilities and features such as telephonic(181) or online registration of public grievances by citizens;provide interface between citizens and the Government represented by officials such as CM’s Secretary and ensure speedy redressal of citizen’s grievance.