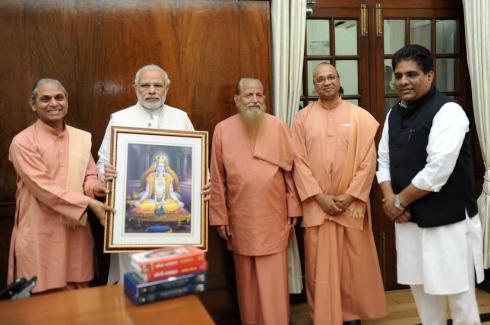 Yogoda Satsanga Society of India (YSS) was founded in Ranchi in 1917 by Paramahansa Yogananda.He is now widely recognized as the Father of Yoga in the West.

His world-renowned Autobiography of a Yogi, has been translated into 38 world languages, including 13 Indian languages.

On the occasion of 100th Foundation Day,followers had a program at all YSS ashrams – Ranchi, Kolkata, Noida, and Dwarahat (near Ranikhet).It started with Prabhat Pheri in and around the YSS Ashram, meditation under the more than 100 years old Litchi tree in the Yogoda Ranchi Ashram, and 100 balloons were released to mark the historic occasion.

Swamiji briefed the P.M about the background, activities and aims and objectives of YSS. He also invited Modi to inaugurate the Centenary Celebrations of YSS in 2017 in Ranchi.

In response,the PM showed considerable interest in the spiritual and charitable activities of YSS in all parts of India. He conveyed his good wishes and agreed to consider their request about the inauguration of Centenary Celebrations,said Nishthananda,Yogoda Satsanga Math,