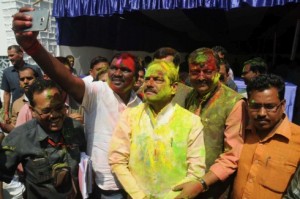 Jharkhand Assembly today concluded its budget session with its members playing Holi a week in advance.

While the annual festival of Holi is slated to be held on March 24,Jharkhand Chief Minister Raghubar Das along with the state Sports Minister Amar Kumar Bauri exchanged colour inside the Assembly premise in Ranchi.

More,to record the event,they took a selfie during a Holi Milan programme outside Jharkhand Assembly in Ranchi on Friday.