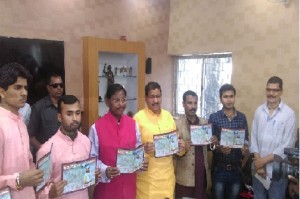 ‘Lift the World Cup Again”.With this theme,a video film was made by Ridum Group only to be inaugurated todaay by Jharkhand’s popular tribal leader and former Chief Minister Arjun Munda.

After inaugurating this video film,made by Hemendra Mishra and Amit Jha,Munda said that the cricket fever has gripped its ans as the schedule of the World Cup T20 has already been made public.

Moreover,the Team India was led by the Prince of Jharkhand Mahendra Singh Dhoni,who is the most successful captain of the Team India,said Munda wishing him and his team good luck .

The inaugural function was organised inside the official residence of the former CM in Ranchi and it was attended among others by BJP leaders including Gama Singh and Rajendra Kesri.